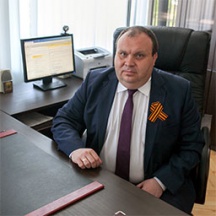 Gorbachev Vyacheslav Yuryevich graduated from the Pyatigorsk State Medical Academy in 1998 with a degree in Pharmacy.

He began his career immediately after the graduation as an equipment operator, a foreman of the galenics shop in the Pyatigorsk pharmaceutical factory.

In 2011, he started his career in FSUE NPO Microgen of the Russian Ministry of Health as the first deputy director of the Belorechensk branch “Department for the Production of Herbal Drugs”. After several months of fruitful work he was appointed the company’s director.
Having arranged effective operation of the company, Vyacheslav Yuryevich was appointed the director of Allergen in Stavropol, a branch of FSUE NPO Microgen of the Russian Ministry of Health, where he works till now.
Due to his ability to organize the team work, initiative and performance Vyacheslav Yuryevich managed to improve the production and increase the indications of the unique Russian company Allergen, producing antitoxic serums, vaccines, drugs for the treatment of dysbacteriosis, preparations for the diagnosis of sexually transmitted diseases and ampoule dosage forms.

In 1940, the Province Sanitary and Bacteriological Institute was renamed the Institute of Epidemiology and Microbiology of the RSFSR Ministry of Health.

At the beginning of the Great Patriotic War the institute increased not only the production volume, but the range of products as well.

In 1952, the Institute of Epidemiology and Microbiology of the RSFSR Ministry of Health was transformed into the Scientific and Research Institute of Vaccines and Serums.

In 1988, the Scientific and Research Institute was transformed into Scientific and Production Association Allergen of the USSR Ministry of Medical Industry.

In 1992, it was renamed FSUE Allergen of the Russian Ministry of Health.

The branch produces the following preparations: antitoxic serums (tetanus, diphtheria, botulism, viper venom); vaccines (BCG tuberculosis and BCG-M); drugs for the treatment of dysbacteriosis (Bifidumbacterin); preparations for the diagnosis of sexually transmitted diseases; ampoule dosage forms (0.1% nitroglycerin solution, etc.). The branch is the only Russian company producing pollen allergens (more than 30 drugs for the treatment and diagnosis of allergy).

In 2007, the branch developed and conducted successful trial of the production of growth media for the diagnosis of tuberculosis.

The branch is located far from residential areas and at a sufficient distance from production sites that may affect the quality of products.

The branch has its own autonomous industrial infrastructure located in the land plot of 18 ha with 45 thousand square meters of production sites with modern technological equipment.