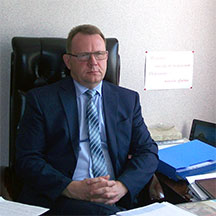 Viktor Ivanovich Polyakov graduated from the Moscow Aviation Institute named after Sergo Ordzhonikidze in the specialty “Machine Building Technologies, Metal Cutting Tools and Machines” in 1984. After the graduation he was employed by Hydromash Gorky Production Association as a section supervisor and worked there until June 1992.

In 1992, Viktor Ivanovich started his career as the chief mechanical engineer in the Nizhny Novgorod Enterprise of Bacterial preparations “ImBio”. In 2001 he was appointed the chief engineer.

During his employment the branch experienced a stable production growth. The leading position is taken by immunoglobulins and blood products (49% of the total volume). Another important group of the product range of the Nizhny Novgorod Enterprise of Bacterial Preparations “ImBio” is bacteriophages (41% of the total volume). Moreover, a significant share of the production volume belongs to preparations for normalizing microflora of the intestines: Lactobacterin, Bifidumbacterin, Bifikol (9%) and diagnostic products (1%).
Due to the professionalism and effective work of Viktor Ivanovich the enterprise has become one of the leaders among Russian producers of medicinal immunobiological preparations.

The Regional Sanitary and Bacteriological Institute was based on the Province Sanitary and Bacteriological Station, the Province Pasteur Station and the Province Malaria Station in 1929. In 1933, it was transformed into the Regional Institute of Epidemiology and Microbiology. In 1940, the institute was expanded by the production department for vaccines, serums and other immunobiological preparations. In 1960, the RF Ministry of Health ordered to establish a company on the basis of the department as part of the Gorky Scientific and Research Institute of Epidemiology and Microbiology.

In 1992, an independent legal entity – the Nizhny Novgorod Enterprise of Bacterial Preparation “ImBio” – was separated from the institute and subordinated to the Ministry of Health of the Russian Federation.

On June 16, 2003, the company was reorganized into the Branch of FSUE NPO Microgen of the Russian Ministry of Health “Nizhny Novgorod Enterprise of Bacterial Preparation “ImBio”.

A significant share in the production volume also belongs to probiotics – bifidumbakterin, lactobacterin, colibacterin in various dosage forms. The Nizhny Novgorod enterprise was the first in the country to start the production of dry bifidumbakterin and probiotic tablets in 1975. In 1978, bifidumbakterin tablets were used in aerospace medicine and in 1984 the preparation was awarded the Silver Medal in the All-Russian Exhibition Center. From 1998 to 2000, the company launched new dosage forms of probiotics in suppositories and the complex preparation – bificol.

In early 70s of the last century, the production of diagnostic systems was separated in a new area. Currently, the range of produced diagnostic preparations is represented by monospecific serums, paper indicator systems, immunoassay systems. The latest development of the shop’s specialists is the immunoassay system for quantitative assay of НВsAg antibodies (MicrAT-НВs) produced according to a unique technology since 2010.

The Nizhny Novgorod branch has its own scientific and research base and carries out applied scientific researches for the development and improvement of drugs and related production technologies. The main results of the company’s scientific and production activities are protected by patents and copyrights.