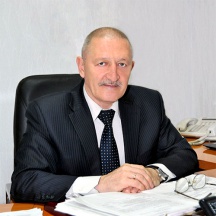 In 1981, after graduating from the Bashkir State Medical Institute, N.V. Zagidullin started his career as the junior researcher of the viral laboratory at the Ufa Scientific and Research Institute of Vaccines and Serums named after I.I. Mechnikov. He dealt with the problems of diagnosis and prevention of influenza, developed an immuno-enzyme system for the rapid diagnosis of the disease.
From 1988 to 1998 he headed the interferon department of SUE Immunopreparat. It was the first interferon purification technology developed in the Russian Federation, which enabled to bring the industrial production of the popular drug to the new level.
In 1994, after finishing the postgraduate education at the D.I. Ivanovsky Scientific and Research Institute of Virology, he defended the thesis “Improvement of Certain Production Stages of Human Leukocyte Interferon”. Results of the thesis were patented and became the basis for the development of new manufacturing instructions for the immunobiological drug Human Leukocyte Interferon.

In 1996, N.V. Zagidullin was awarded the academic title - senior researcher in the sphere of Virology. In 1998, he became the company’s deputy director for production and technologies. He has more than 13 invention patents and 50 scientific works and is heading some R&D areas. Since 2013, he has been the director of the Ufa branch of NPO Microgen – Immunopreparat.

Nail Vilenovich skillfully coordinates the work of his team in order to implement international GMP standards, ensure the effective and smooth production, develop new production technologies of high-quality and safe medicines for the practical healthcare.

The Pasteur Station of the Ufa Province Council was officially opened on June 5, 1905. It was needed due to the high prevalence of infectious diseases among the local population, the extremely low level of health culture, a lack of preventive preparations and insufficient number of trained medicinal workers (thematic photo on the first page of the NPO’s website).

In 1906, the Bacteriological Laboratory of the Ufa Province Council consisting of the diagnostic room, the vaccine and serum department and the smallpox calf house was based on the laboratory. The head of the station was an invited bacteriologist – doctor V.N. Kryzhanosky.

Under his guidance, the laboratory started the production of smallpox detritus and – in 1907 – diphtheria and scarlet fever serums.

But by 1911 it was expanded by the veterinary department and a year later by the chemical and hygienic department for sanitary and hygienic researches, which began the production of anti-dysentery and polyvalent antistreptococcal serums.

In 1913, the microbiological department was established to carry out sanitary, bacteriological, histopathological and serological studies, including the Wasserman reaction.

During the October Revolution of 1917 the Bacteriological Institute was transferred by Kolchak’s army to Omsk and until 1921 it was divided and operated in two cities.

In 1934 the Institute was renamed the Bashkir Regional Sanitary and Bacteriological Institute and expanded by the biological department and the laboratory for the local control of bacterial preparations.

During the war, due to the wartime circumstances the institute’s profile was radically changed: the production of serums was transferred to the Mechnikov Moscow Regional Institute evacuated to Ufa, and the production of vaccines, bacteriophages and diagnostic preparations was carried out by Ufa’s microbiologists.

The effective joint actions of microbiologists and physicians during the war helped to prevent tremendous epidemic outbreaks, which saved hundreds of thousands of lives.

The further significant development of the institute occurred after the establishment of the Immunopreparat Scientific and Production Association on its basis in 1988.

The manufactured products have been awarded 96 medals of the USSR Exhibition of Economic Achievements – the All-Russian Exhibition Center, 15 diplomas, 205 USSR copyright certificates and Russian patents. It has published 18 monographs and 39 collections of scientific papers. It has trained more than 20 doctors of sciences and 120 candidates of sciences.

At present, it has the staff of about 1800 employees. It produces various immunobiological preparations and medicines for the diagnosis, prevention and treatment of infectious, allergic, bodily diseases and immunity correction – antitoxic serums, vaccines and toxoids, blood products, bacteriophages, cytomedines, detoxification solutions.

For the great contribution to the development of practical healthcare and medical science the team of the Ufa branch of FSUE NPO Microgen of the Russian Ministry of Health was awarded republic, national and international awards. Leading specialists were awarded the title of distinguished physicians, chemists, scientists of Russia and Belarus, awards and medals.