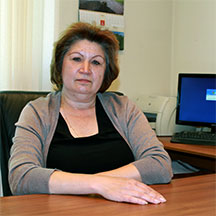 From 1996 to 2003, she took the position of the deputy head for quality assurance – the head of the biological control department. As the chairperson of the sanitary regime committee of the Moscow Department of Bacterial Drugs she was a member of the Quality Assurance Council and the Commission for the Analysis of Reasons for Product Non-Compliance.

In 2003, when the Moscow Department of Bacterial Drugs was included in newly established FSUE NPO Microgen of the Russian Ministry of Health, Elena Serafimovna was appointed the Operations Deputy Director.

E.S. Sidorenko is the author of the patent “Method of Production of an Associated Mumps-Measles Vaccine”.

For high production performance Elena Serafimovna has repeatedly deserved various awards and honors. In 2007, for the long-term and effective work Elena Serafimovna was awarded the Excellent Medical Worker's Badge, in 2012 she received a Honorary Diploma of the Moscow Government for her valuable contribution to the fact that the Moscow Department of Bacterial Drugs is actually the only national production of vaccines for the prevention of measles, mumps and rubella supplied under the National Calendar of Preventive Vaccination.
E.S. Sidorenko has an active social life and participates in different city projects. In 1997, for her active position she received a state award “In Commemoration of the 850th Anniversary of Moscow”, in 2010 – the medal “For Contribution to the Celebration of the 65th Anniversary of the Victory in the Great Patriotic War”.

In 1956, the USSR Soviet of Ministers obliged to establish a new scientific and research institute in Moscow aimed to the development and mass production of drugs for treatment, diagnosis and prevention of poliomyelitis. All required employees of all categories were trained during a short period of time, and on November 4, 1957, the production of the then-most complex inactivated poliomyelitis vaccine began. By 1960, the production department of the Scientific and Research Institute of Viral Preparations had produced 43 million of doses of poliomyelitis vaccine to vaccinate more than 8 million children, which significantly reduced the incidence of paralytic poliomyelitis in our country. At the same time the vaccine was exported to Romania, North Korea, Iran, Japan, Cuba and other countries.

Later, tick-borne encephalitis, smallpox, rabies vaccines and the embryo influenza vaccine were developed and introduced into the healthcare practice.

In the middle of 60s, in accordance with the WHO global smallpox eradication program the Scientific and Research Institute of Viral Preparation developed the production technology, started the production of the standard highly active thermostable dried smallpox vaccine and supplied to the WHO more than 1.5 billion doses for 40 Asian and African countries (the USA supplied 20 million doses).

The original production technology of live measles and mumps vaccines was developed and introduced in the Scientific and Research Institute of Viral Preparations in the middle of 60s. In 1967, the Production Department of the Scientific and Research Institute of Viral Preparations started production of measles vaccines, and in 1974 – mumps vaccines, sufficient to meet the needs of the huge country. Due to the wide use of these preparations our country managed to prevent measles in more than 1.5 million children and epidemic mumps in 1.0 million children per year. The preventive vaccination of measles and epidemic mumps has reduced the incidence of these infections by tens of times compared with the minimum incidence rates of the pre-vaccination period. The live measles and mumps vaccines were recognized by the WHO as preparations compliant with the world’s standards. They have been imported to India, Vietnam, CIS countries for years.

In 2006, the company introduced the production technology of the rubella vaccine from the substance received from the Institute of Immunology, Inc., the Republic of Croatia, and since 2008 it has been produced on an industrial scale.

In 2008-2009, the Moscow Department of Bacterial Drugs developed the production technology of the rubella vaccine from its own substances. By now, the preparation has been registered and the industrial production has started.

Besides immunobiological preparations, the Moscow Department of Bacterial Drugs produces Epoetin beta – a solution for intravenous and subcutaneous injections in the form of recombinant human erythropoietin stimulating the generation of red blood cells in human blood. The company produces the erythropoietin substance by gene engineering.

At present, the Moscow Department of Bacterial Drugs is actually the only national company producing vaccines for the prevention of measles, mumps and rubella. For many years, measles and mumps vaccines, and recently – rubella vaccines, are supplied by the Moscow Department of Bacterial Drugs under the National Calendar of Vaccination according to the government contract.

The development of the combined measles, mumps and rubella vaccine is at the final stage – pre-clinical studies have been successfully completed, clinical studies are underway.

The Moscow Department of Bacterial Drugs carries out the full technological cycle of drug production, including the delivery of products in the “cold chain” regime.