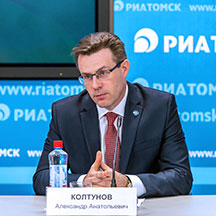 In 1994, after graduation from the Medical and Biological Department of the Siberian Red Banner of Labor Medical University with the degree in biochemistry, A.A. Koltunov was enrolled in postgraduate study at the Scientific and Research Institute of Pharmacology of the Tomsk Scientific Center of the Siberian Department of the Russian Academy of Medical Sciences. In 1997, he successfully defended the thesis of candidate of medical sciences “Pharmacological Correction of the High Blood Viscosity Syndrome Developing with Cardiovascular Diseases”. Materials of the thesis underlay the development of a number of herbal drugs with rheological properties. A.A. Koltunov is the author of more than 20 publications and monographs, including 2 invention patents.

Alexandre Anatolyevich started his career in 1997 as a laboratory doctor in the Medical Department No. 42 of Zelenogorsk, Krasnodar Territory, and in 1999 he was appointed a forensic chemist in the city forensic medical examination department.

In 2002, he became a researcher, then a senior researcher of the Scientific and Research Institute of Pharmacology of the Tomsk Scientific Center of the Siberian Department of the Russian Academy of Medical Sciences, where he was engaged in the development of new herbal immonomodulatory drugs.

In 2003, when NPO Varion became a part of newly established FSUE NPO Microgen of the Russian Ministry of Health, A.A. Koltunov was invited as the head of the company’s blood service.

As a result of organization of effective operation of the blood service in the Tomsk branch in 2008 Alexandre Anatolyevich was appointed the head of the Department of Medicines and Growth Media, where he coordinated and headed some scientific and research projects.

One of the most promising results received by A.A. Koltunov was improvement of the full cycle production technology of tissue preparations (Aprotinin drugs) which enabled to improve their quality to the level of foreign analogs. Ingitril has been registered and brought to the stage of preparation for mass production.

During the recent years A.A. Koltunov has been working on the production technology of the interferon inducer of natural origin – sodium ribonucleinate of killer yeast strains. NPO Virion has successfully produced experimental production batches of the preparation, which has been brought to the stage of registration.
In 2012, A.A. Koltunov was appointed the operations deputy director, and in 2013 he became the director of the region’s oldest microbiological institution – NPO Virion, which is included in the national register of leading industrial enterprises of Russia.

For his achievements in labor and public life Alexandre Anatolyevich was awarded the Honorary Diploma of the Governor of the Tomsk Region, the Commendation of the management of FSUE NPO Microgen of the Russian Ministry of Health and in 2012 he received the medal “For Merit to the Enterprise” for the company’s development.

The Company’s rich history dates back to the opening of the station for the production of anti-diphtheria serum at the Imperial Tomsk University in 1896, the first one in the Asian part of Russia.

In 1904, the Ministry of Internal Affairs of the Russia adopted a decision to open a bacteriological institute at the Imperial Tomsk University.

The stone-laying ceremony for the institute’s building took place on August 6, 1904, and on September 1, 1906, the Tomsk Bacteriological Institute named after Ivan Churin and Zinaida Churina was opened.

In the 20s of the last century the Bacteriological Institute was separated from the Tomsk University and became an independent institution subordinated to the healthcare authorities. A new objective was set to the institute – the production of bacterial drugs. And in 1937 it became the country’s second institute for the production of the above preparations after the I.I. Mechnikov Central Scientific and Research Institute of Vaccines and Serums in Moscow and the first one in Siberia.

During the Great Patriotic War the institute’s drugs saved our soldiers in trenches from dysentery and typhoid, helped the wounded to treat gangrene. During these years the institute produced not only vaccines and serums, but also antibiotics, continuing to develop its research activities. “Everything for the front, everything for victory” was not a slogan, but the joint aspiration of everyone’s heart!

In 1953, the institute was transferred to the union subordination, included in the group of bacteriological institutes and named the Tomsk Scientific and Research Institute of Vaccines and Serums (TomNIIVS).

1958 was particularly important for the company due to the beginning of construction of the TomNIIVS’s production complex.

Built according to then-applicable requirements to the production of vaccines and serums, it was commissioned in 1965. The scientific part of the institution obtained the required space previously occupied by the production. In 1965-1966, the profile of the Tomsk Scientific and Research Institute of Vaccines and Serums was finally determined as the institute of viral preparations, toxoids, antitoxic serums and gamma globulins.

By its 70th anniversary the Tomsk Scientific and Research Institute of Vaccines and Serums had become the largest scientific center in Siberia and Far East consisting of a scientific and research institute (9 laboratories), a production enterprise for bacterial and viral preparations (22 production shops and departments) and the nursery for laboratory animals “Rassvet”. The institute’s staff was more than 1100 employees, 155 of them had a university degree, it had 5 doctors and more than 40 candidates of sciences.

In 1976, for merits in the development of healthcare, the medical science and professional training the Tomsk Scientific and Research Institute of Vaccines and Serums of the USSR Ministry of Health was awarded the Order of the Red Banner of Labor.

By 1981, the Tomsk Scientific and Research Institute of Vaccines and Serums had become the country’s main producer and research center for the improvement of the tick-borne encephalitis vaccine technology with the annual production volume of 4-5 million doses of the preparation.

On April 14, 1988, it was transformed in Virion Scientific and Production Association.

The company’s team, like the whole country at that time, was searching for new approaches to maintain and increase production volumes. Having overcome all difficulties associated with the emerging market economy, Virion Scientific and Production Association did not only preserved its production potential, but even significantly strengthened it by the intensification of technological processes, systematic re-equipment and increase in the production of preparations being in great demand in the market.

Now the team of NPO Virion continues its result-oriented and hard work aimed at the production development, improvement of technological processes, the quality of products and effectiveness of scientific researches.

NPO Virion is one of the largest company of the group, it has a powerful production base and qualified personnel, which has been enabling a stable increase in production volumes for many years.

The branch is one of the main, and for some positions – the unique, producer of a number of immonobiological drugs. It produces the whole range of drugs for tick-borne infections (tick-borne encephalitis, ixodid tick-borne borreliosis, human monocytic ehrlichiosis and human granulocytic anaplasmosis) – this is Russia’s only company producing smallpox vaccines! The share of drugs included in the Vital and Essential Drugs List is more than 45% of all its items. .

In 2014, the Tomsk branch of FSUE NPO Microgen of the Russian Ministry of Health celebrated its 100th anniversary.