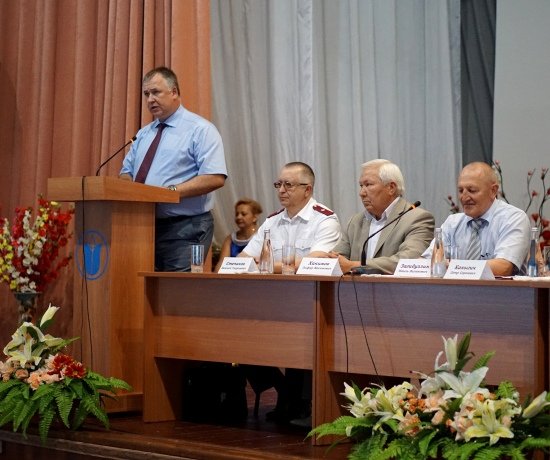 On June 19, 2015, there was a ceremony in honor of the 110th anniversary of Immunopreparat, NGO Microgen branch in Ufa. The company team was greeted by the Director General of NGO Microgen Peter Kanygin:

"Immunopreparat is one of the oldest and most honored companies of domestic pharmaceutical industry. We are sincerely proud of its glorious history and great achievements in the field of preventive medicine. We had brilliant scientific and operational human resources, great examples from more than 30 labor dynasties. Over the century, our multinational staff has changed, but has always worked with full dedication for the benefit of national health care. You have concentrated advanced scientific achievements; you develop high-quality drug products some of which have no analogues in the world; a program for technical and technological re-equipment was developed".

From 2005 to 2014, the total output of Ufa pharmaceutical company has doubled. Last year, the volume of the drugs produced was 2 billion 916 million. Expected production in 2015 will amount to 2 billion. 931 million rubles. Planned productivity in the current year is 1937, 453 thousand rubles. The average salary of the company's employees in 2014 compared to 2005 increased by 2 times. Over the 110 years of history, Ufa drugs have preserved the health and saved lives of millions of people. Today Immunopreparat is one of the fastest growing companies within NGO Microgen. I warmly congratulate you on the celebration and your professional holiday - Day of the Medical Worker! Thank you for your selfless work!"

"110-year anniversary of our company is a great age of maturity! This requires dozens of years of intense everyday work, scientific research and long-awaited discoveries. More than a centennial journey of Immunopreparat, one of Russia's leading scientific and industrial complexes in the development and production of immunobiological and pharmaceutical drug products, has been marked by significant achievements in microbiology, virology, immunology, and biotechnology."

The company has developed some of the best Russian schools regarding technologies for production and practical introduction of toxoids; flu and rabies vaccines; interferon; blood products; bacteriophages; drug products against pertussis; enzymatic, anti-allergy and other high-performance products. For the first time in the world medicine, inactivated dry rabies vaccine, concentrated cell-culture purified rabies vaccine with a reduced administration scheme were developed and implemented there. For the first time in the country, Immunopreparat introduced reactor process of tetanus toxoid production, developed and mastered production of diphtheria toxoid; reactor cultivation method; adjusted industrial production of botulinum toxoids, introduced production of pertussis suspension and DTaP vaccines.

Immunopreparat specialists are experienced in the development and production of live flu vaccines, adsorbed chemical, whole-virion, and inactivated eluate-centrifuge vaccines; for the first time in the country, this company mastered industrial production of trivalent polymer-subunit vaccine called Grippol. Immunopreparat was one of the first in the country who has created a vaccine against avian and swine flu. The company did a lot of work on blood products: anti-tick and antistaphylococcal immunoglobulins, ceruloplasmin; they also greatly expanded the range of specific products produced.

Ufa branch of NGO Microgen developed and is the only Russian producer of freeze-dried (dry) presentation of a human IV immunoglobulin Immunovenin that meets the requirements of the European Pharmacopoeia and the World Health Organization. For the first time in the national health care, our company opened production of human leukocyte interferon and established technology of its purification; that enabled commercialization of this drug on a new level. For the first time in the country, we have also organized large-scale production of antiallergic immunoglobulin pollen allergens and developed associated STAF-proteus Pseudomonas vaccine.

Our research institute is one of the pioneers in the creation of bacteriophage-based products that do not have analogues in the world and are effective substitutes for antibiotics. We developed new technologies for industrial production of highly purified intestinal phages and implemented method of preparing tablets of polyvalent bacteriophages. For the first time in the world, Ufa developed a method for treatment and prevention of chronic diseases such as ozena and scleroma using Klebsiella purified polyvalent phage. The most versatile of its indications is polyvalent purified piobacteriophag for the treatment and prevention of a wide range of diseases. We developed novel drug products such as Enterobacter polyvalent bacteriophage and purified polyvalent Serratus bacteriophage. Ufa branch of NGO Microgen is one of the leading Russian and CIS manufacturers of unique bacteriophage products for the prevention and treatment of a wide range of diseases.

Today, the search for new medicines and improvement the efficiency of manufactured products is one of the main tasks of our team. We develop novel multifunctional high-quality and safe medical products to protect adults and children from dangerous infections. Intellectual property of the company include advanced production technology process for such products as Polyvalent Purified Piobacteriophage Prostaor®, Dalargin, Immunovenin®, Lidaza, Chondrolon®, Cerebrolysat, Interferon, Inferon and many others. The bulk of the drugs has been developed by our specialists. Immunopreparat is the developer and the only Russian manufacturer of the first domestic high-purity natural complex of type A botulinum toxin in complex with hemagglutinin, Relatox, for use in cosmetic and aesthetic medicine. Its clinical trials in neurology for the rehabilitation of patients with spastic muscle damage after a stroke and treatment of children with cerebral palsy are near completion.

Our high-tech developments include influenza subunit vaccine of the last generation, Sovigripp, with the immune adjuvant Sovidon. We manufactured pilot-scale series of the first domestic highly immunologically active split influenza vaccine Microsplit based on no-RBC technology. Our scientists have developed a manufacturing process for the first Russian type A and C bivalent polysaccharide meningococcal vaccine based on strain cultivation in a reactor. Experimental studies on the development of original highly purified rabies vaccine are being continued on a new generation of continuous cell cultures. We have been developing a modern manufacturing technology of DTaP vaccine without thimerosal for child protection against pertussis, diphtheria, tetanus. Chondrolon-Pro is under testing for the treatment of degenerative diseases of the musculoskeletal system and regeneration of cartilage surfaces of the joints.

As part of the modernization of the enterprise according to international standards GMP, together with foreign and Russian partners, reconstruction of plants manufacturing cytomedines, associated drugs, bacteriophage preparations and other units was performed; modernization of vaccine manufacture processes is being continued. New production facilities have been developed, including a plant for multicomponent vaccines, aseptic filling station into individual syringes, microbiological and analytical laboratories; innovative highly sensitive methods for quality control of drug products are actively introduced. The drug products are delivered to regions of the Russian Federation and abroad.

Today, the principles of team work remain unchanged. The most important of them is professionalism and desire to help people, consistent fulfillment of public contracts on production of vaccines for immunization of Russian population, as well as manufacturing of other popular and promising drugs.

Management and staff of the company were greeted by the leadership of the Republic of Bashkortostan and well-known experts, including: Chief State Sanitary Inspector Ye. Stepanov, Chief Therapist V.H. Mustafina and others. There was a concert for participants of the ceremony prepared by the trade union committee of the enterprise and amateur artists.